The versatility of porcelain tile 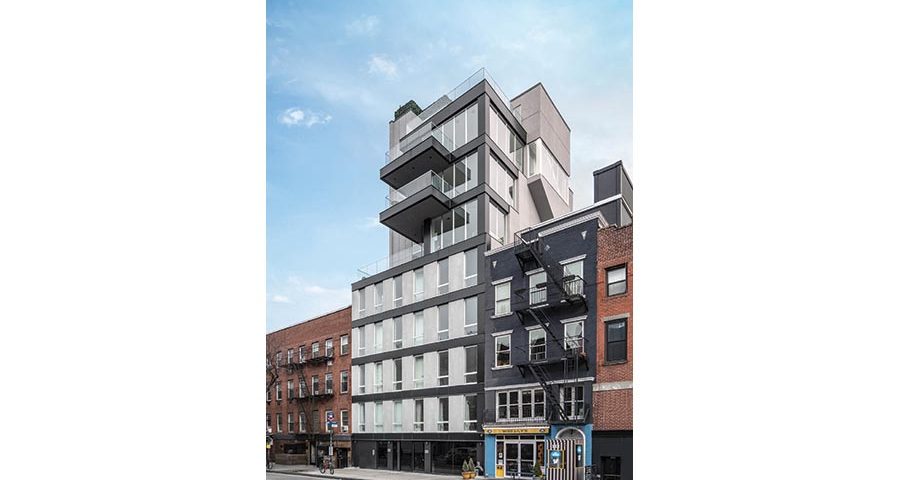 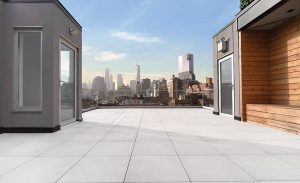 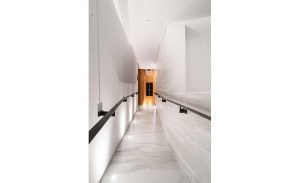 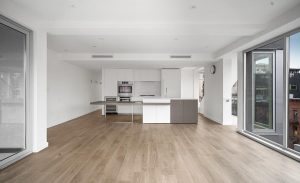 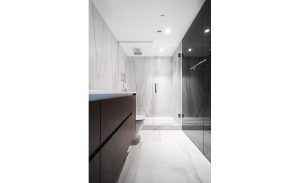 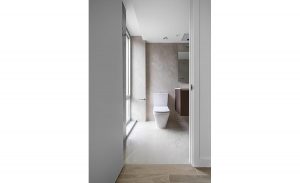 Houston Street is a major east-west thoroughfare in downtown Manhattan, which runs crosstown across the full width of the island, from Franklin D. Roosevelt East River Drive and East River Park on the East River to Pier 40 and West Street on the Hudson River. It generally serves as the boundary between neighborhoods, with Alphabet City, the East Village, NoHo, Greenwich Village and the West Village to the north and the Lower East Side, most of the Bowery, Nolita and SoHo to the south.

On West Houston Street in SoHo — a designated area “South of Houston Street,” for which “SoHo” was coined in 1962 — an eight-story mixed-use residential building containing six apartments was recently completed, which features various types of porcelain tile from Florim on the exterior and interior spaces.

“The goal was to create a calming repose from the frenzy of downtown Manhattan by bridging the loud West Houston Street to the serenity of MacDougal-Sullivan Gardens located at the rear of the building,” said Efrain Perez, senior associate at SWA Architecture in New York, NY.

The 17,500-square-foot building, located at 132-136 West Houston Street, demonstrates the versatility of tile in contemporary architecture, opposed to the American colonial and modern architecture commonly seen throughout the city.

“Exterior materials reflect the neighborhood’s eclectic archetype,” said Perez. “The interiors are minimal and provide a calm retreat from the variegated city environment.”

For the top four floors, which each include a terrace, a different design combination was created using a stucco finish, in order to accentuate the different volumes using texture.

The floors of each terrace feature 12- x 24-inch porcelain tiles from Florim’s Industrial collection in the color, “Steel.” The cement-inspired tiles, which were used in a 10-mm thickness, were installed on top of a pedestal system.

On the rooftop terrace and in the backyard facing Mac-Dougal-Sullivan Gardens, 24- x 24-inch tiles from the Industrial collection in the same color were utilized for the flooring, but in a 20-mm thickness. These tiles were also installed using a pedestal system.

On the interior of the building, tile was used extensively throughout the lobby, corridor, elevator walls and all apartments. The same tiles from Cedit’s Matrice collection that are featured on the exterior facade were carried into the lobby, where they were used in a 6-mm thickness to create a bench with mitered edges. For the flooring, 48- x 95-inch porcelain tiles from Rex Ceramiche Artistiche’s I Classici di Rex collection were used in a 6-mm thickness. Inspired by different types of marble and wood, the tiles were implemented in the marble-inspired design, “Calacatta Gold,” in a matte finish.

Smaller, 8- x 32-inch tiles from the Matrice collection in the color, “Forma,” were also used in a 10-mm thickness for the corridor and elevator walls. Set against a gray-like background, “Forma” incorporates a distinct, brushed graphic, which provides a nice complement to the marble-inspired floors.

For all of the flooring throughout the apartments, a Nordic, wood-inspired porcelain tile collection was utilized in a 10-mm thickness. The 8- x 48-inch plank tiles from Casa Dolce Casa’s Wooden Tile collection were used in the beige-and-tan-like color, “Wooden Almond,” which stand out against the all-white walls and kitchen accessories.

In the apartments’ master bathrooms, the 48- x 95-inch panels from the I Classici di Rex collection in “Calacatta Gold,” which were used for the corridor and elevator walls, span the entire length of the walls, while a 48- x 48-inch format was used on the floors. Both sizes were used in a 6-mm thickness with a matte finish.

The guest bathrooms in each apartment embrace a more industrial design using porcelain tiles from Florim’s Styletech collection. Combining wood and metal-inspired looks in an attempt to fuse both styles, the tiles from this collection were implemented in a 48- x 48-inch format on the floor and in a 48- x 95-inch format on the walls. The lightest color in the collection, “Metal/style_02,” was applied in a 6-mm thickness with a soft finish.

“The colors and textures were chosen to reflect the palettes of New York City’s ubiquitous masonry architecture skyline,” said Perez.

Roughly 5,000 square feet of tile was used to complete the project, which was supplied locally by Porcelain Source in Brooklyn, NY.

Although no unusual problems were encountered during the design and construction phases, every project has its own set of challenges. “The challenge that plagued this project was to design a structural system to shore and support the adjacent property party walls, while maintaining a clean openness within the interior spaces,” said Steve Wygoda, owner of SWA Architecture.

Altogether, the building took around 18 months to complete, with very positive reactions since its opening last year. “All of the units have been rented, which speaks volumes considering the competitiveness of housing in New York City,” said Wygoda.

The building was also recognized with the grand prize award in the residential category at this year’s Ceramics of Italy Tile Competition. 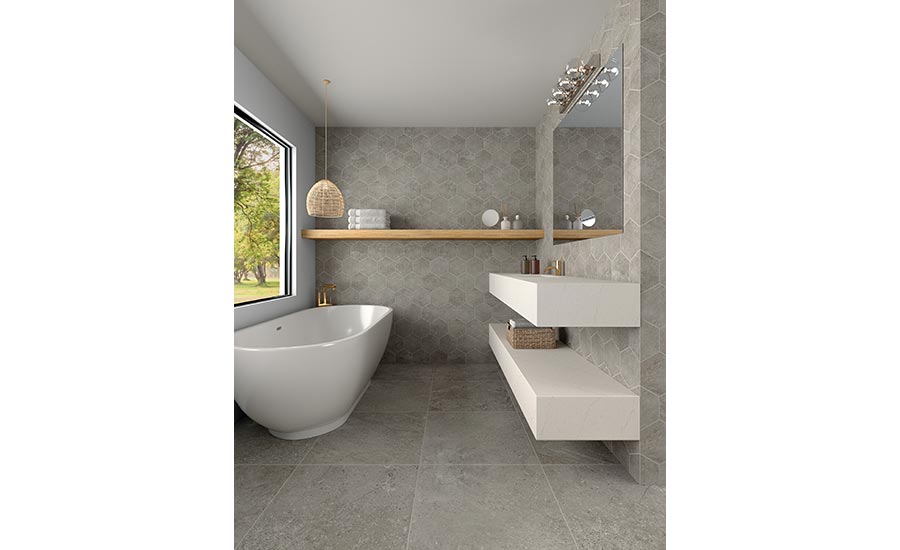 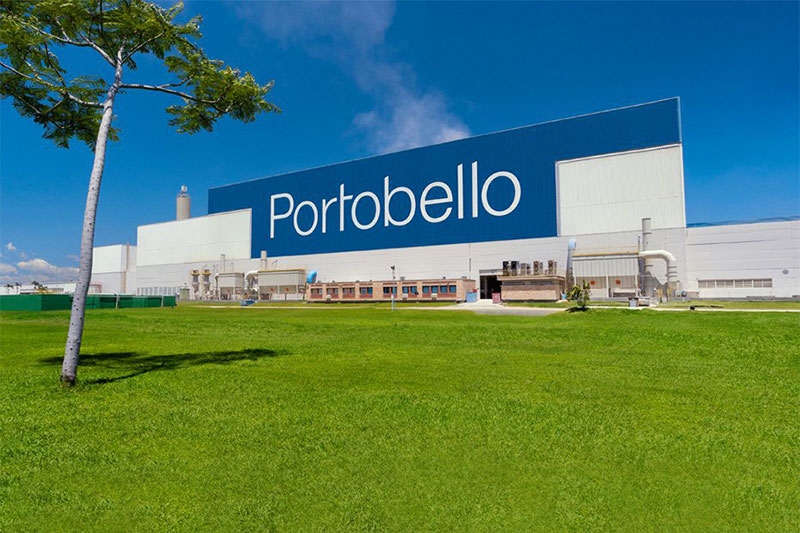 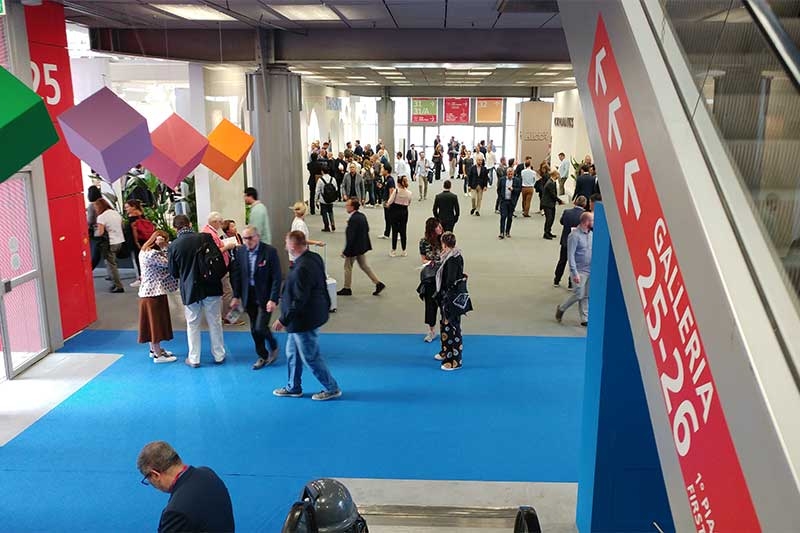